Like most North American cities, Winnipeg’s urban footprint increased significantly relative to its population in the post-war years. From 1971 to 2019, its settlement area nearly doubled in size (an increase of 92%), while its population only grew by only 37%[1].

The settlement area includes all urban development used to support Winnipeg’s growth. This definition is similar to that of the Municipal Benchmarking Initiative (MBN) and the map is consistent with the historic 1966 Metropolitan Winnipeg Development Plan ‘Historical Growth Pattern’ map in that it shows all forms of growth by parcel, including golf courses, rail yards, park space, etc.

Note: This is an informational map only and is not intended to be regulatory or to have any policy implications.

At the same time, the population of its Mature Communities declined by 82,000 people between 1971 and 2016[2]. This was largely due to declining household sizes as well as increased economic prosperity allowing people to purchase larger, more land-intensive single-family dwellings with multiple vehicles per household. This decline primarily occurred in the 1970’s and 1980’s and population levels have started to rebound in the 2000’s and 2010’s. 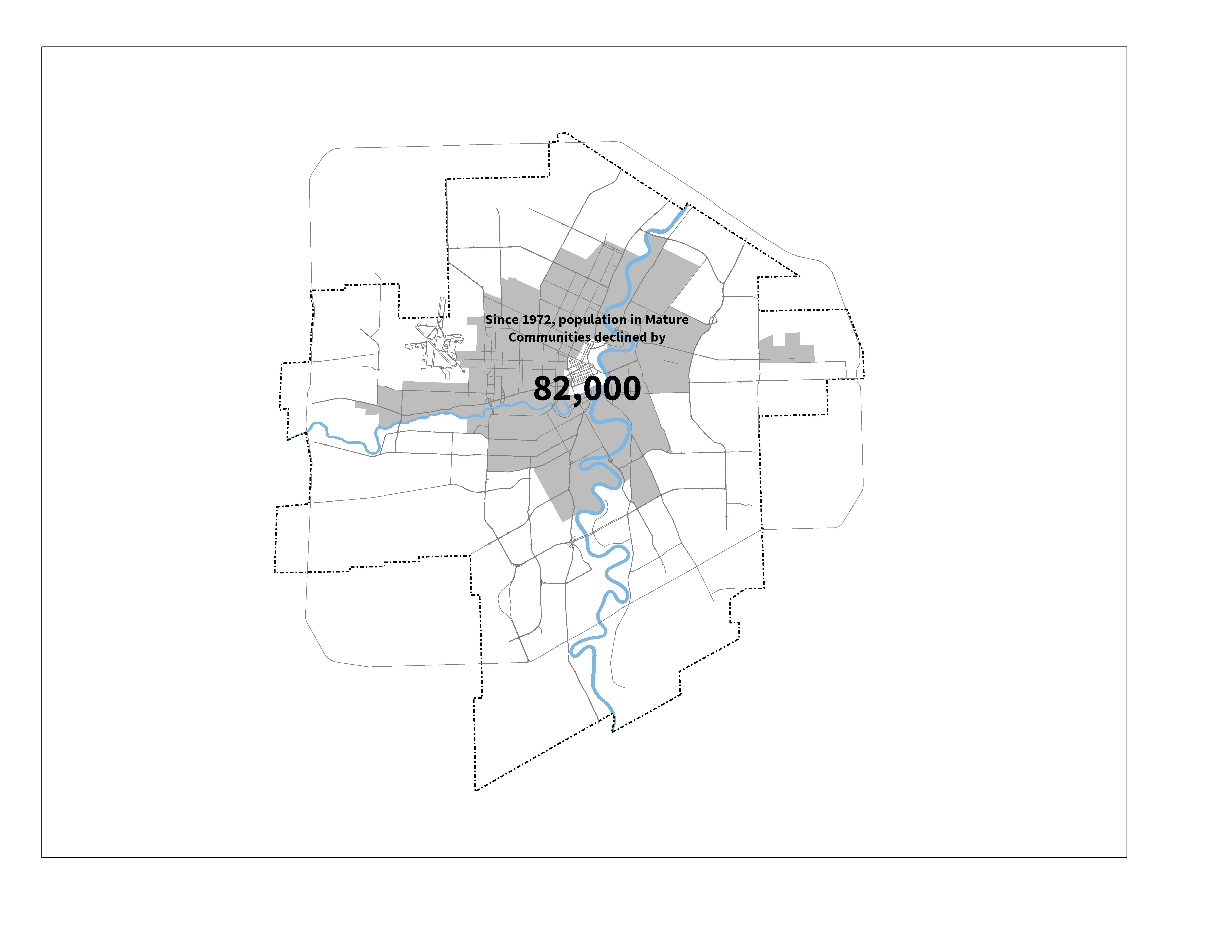 Our growth patterns have been primarily driven by changing consumer preferences for larger lots and larger homes. 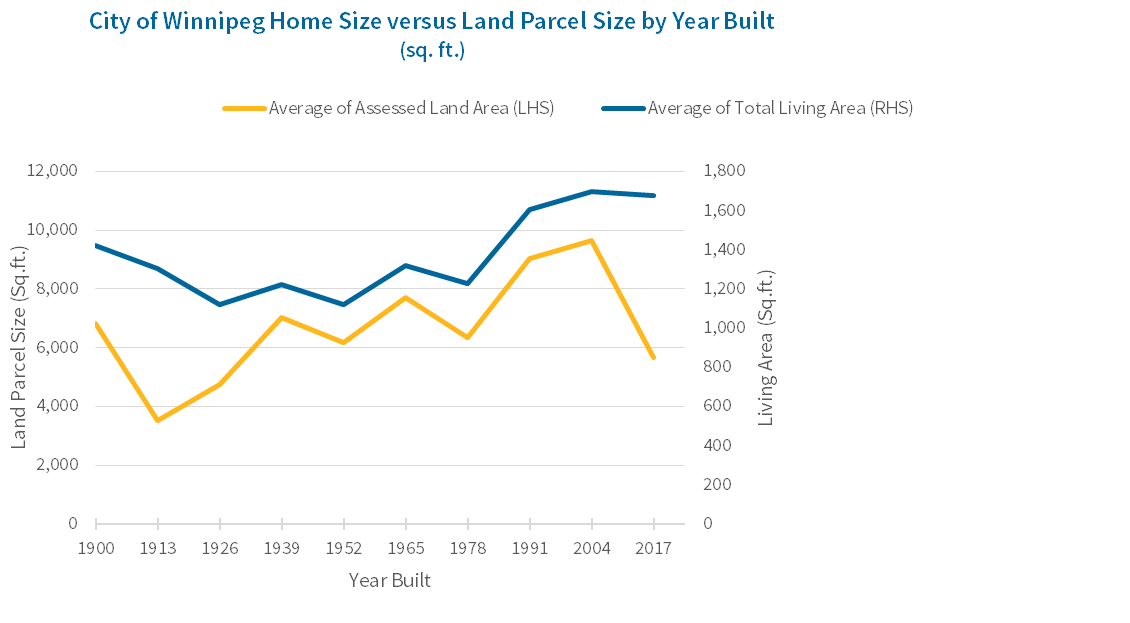 In 1918, the average living area for a single family detached home was 997 square feet. This number dropped during the depression and WWII but has been steadily increasing to around 1,700 square feet today.

These trends have left Winnipeg with an urban fabric that is increasingly difficult to maintain. For example, from 1971 to 2016, Winnipeg’s population grew by 32% but the length of its linear water pipes grew by 131%. With its budgets for both the maintenance and construction of new infrastructure stretched increasingly thin, Winnipeg is struggling to keep up with the needs of a growing city. The 2018 State of the Infrastructure Report estimated its 2018-2027 infrastructure deficit at $6.9 billion, which is exacerbated by limited revenue growth over the previous two decades.

Over the last decade, housing preferences in Winnipeg have undergone a dramatic shift, following similar trends in other cities. While single-family dwellings have historically been the preferred housing type going back several generations, the number of multi-family housing starts (semi-detached, row, and apartment dwellings) first exceeded single-family housing starts in 2012. This trend has continued every year since. 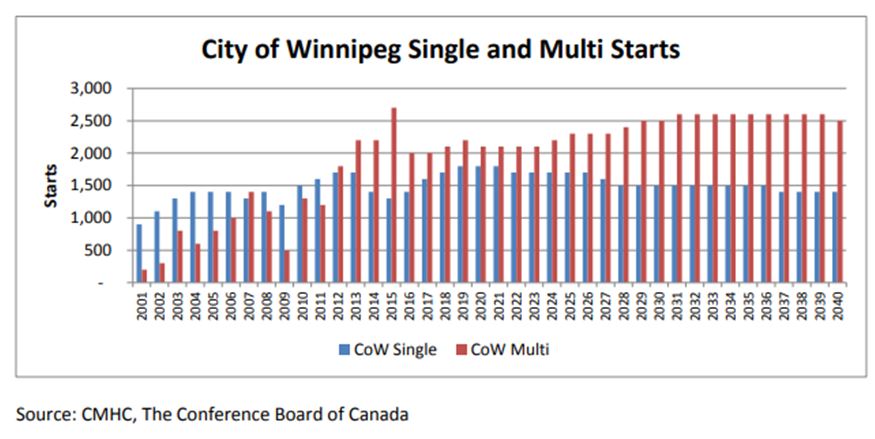 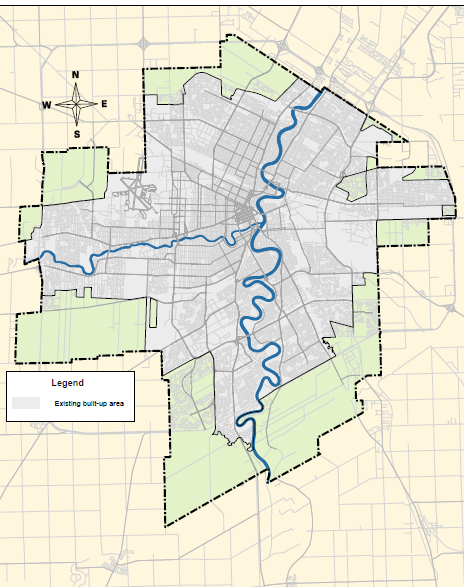 Largely as a result of this market shift, greenfield development has become much more dense than suburbs planned even just ten years ago. Bridgewater Forest, the first phase of the Waverley West suburb, began building in 2007. This area has approximately eight units per net acre (roughly equivalent to Amber Trails or South River Heights). However, more recent developments are planned to accommodate densities between 12 and 15 units per net acre (i.e. between The Maples and Wolseley).

In contrast to single-family dwellings, the most land-intensive of all dwelling types, multi-family units can be accommodated almost anywhere that is compatible. As a result, intensification has increased, with 45% of all new residential units having been located in the existing built-up area of the city between 2011 and 2018[3].

The table below provides a summary of new residential dwelling units by percentage for each area of the existing urban structure from 2011-2018. The urban structure map below the table provides a visual reference to show where these areas as located. 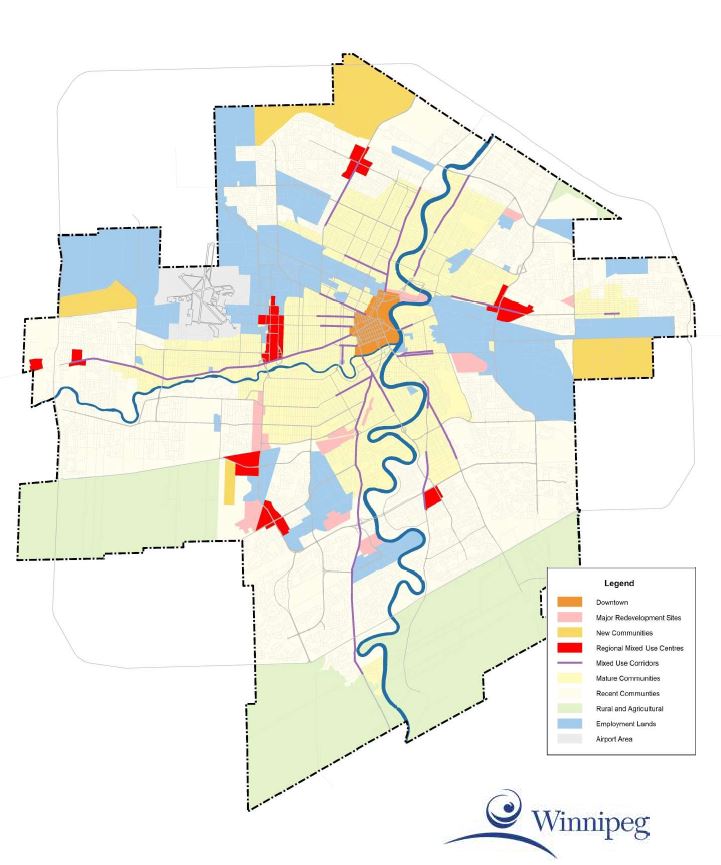 For more information, see the following: