What is the Eastern Corridor Study?

The Eastern Corridor Study is a multi-year project being undertaken for the City of Winnipeg. It recommended a preferred corridor for rapid transit infrastructure between Downtown and eastern Winnipeg and is now in the final stage of the study.

Why is the Eastern Corridor the next rapid transit corridor being studied?

The 2011 Transportation Master Plan made the recommendation for an eastern rapid transit corridor to be the next corridor to study following the Southwest Transitway. The 2021 Winnipeg Transit Master Plan outlines a recommended staging for building this corridor and others throughout Winnipeg, generally moving in steps from Downtown outward.

Has the public been involved in the study?

To date over 4,800 people have participated in pop-up events, stakeholder workshops, community meetings, and open houses. At these events, members of the public shared their aspirations for a new Eastern Corridor route, provided input on how route options should be evaluated, and reviewed and commented on potential route alignments and options.

When will construction start?

There is no timeline for construction yet. The current project is a conceptual design study, which is the first step in the design process. There are many more steps before construction.

Through the Winnipeg Transit Master Plan, which is a separate but related study, the City prioritized each segment of rapid transit throughout the city. Parts of the Eastern Rapid Transit Corridor are identified as Priority Level 2 of 4 (medium-term priority), and other parts as Priority Level 4 of 4 (long-term priority). The highest priority (1 of 4) is through Downtown Winnipeg.

How was the recommended corridor determined?

Will you be replacing the Louise Bridge?

The Louise Bridge is nearing the end of its service life. The bridge is narrow and has weight and size restrictions on the traffic it can handle.

City Council has approved the Eastern Rapid Transit route that would use a new Louise Bridge. The study identifies several options to replace the Louise Bridge or rehabilitate the current one. Please see the presentation for more information.

What areas of the city are included in the Eastern Corridor Study?

In 2017 when the project launched, the study area involved many neighbourhoods in central and east Winnipeg. The original study area included as six ‘character areas’ based on similar neighbourhood attributes and geographic boundaries such as rivers, roads, and rail lines:

As the project evolved, and Council approved the Eastern Rapid Transit Corridor route, the study area became incrementally smaller with each step. It is now focusing on the area between the Main Street CP Railway underpass and Watt Street.

Are new pedestrian and cycling routes part of the Eastern Corridor Study?

Yes. Pedestrian and cycling infrastructure plans are include in the presentation.

Will the corridor be a separate Transitway like the Southwest Transitway?

The segment of the Eastern Rapid Transit Corridor between Main Street and Watt Street will include two types of transit infrastructure, depending on the specific area and local context: 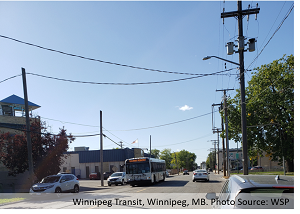 A street that is shared between Transit vehicles and other vehicles, but where Transit can operate efficiently without congestion. In this case, the Transit Boulevard is on Sutherland Avenue, which runs parallel to Higgins Avenue, a street that can be severely congested. The Transit Boulevard option was selected in part to avoid widening Higgins Avenue. The main investment on Sutherland Avenue would be in transit stations and improvements to sidewalks and crosswalks to help people access each station. Transit boulevards are utilized on streets with low traffic volumes where the efficiency, frequency and reliability of transit will be largely unaffected. 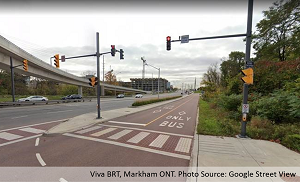 In this configuration, dedicated lanes for buses run alongside existing traffic, with both directions of transit on one side of the street. Transit is separated from other traffic by a small barrier, and special traffic lights control each intersection, but buses run at the same speed limit as the street. This configuration is recommended on and around the Louise Bridge.

How will neighbourhood connectivity be considered in the project?

Why is Winnipeg proceeding with bus rapid transit (BRT) over other options such as light rail transit (LRT)?

BRT has the flexibility of enabling buses to use transitway infrastructure and then seamlessly transition to running on regular streets, sometimes saving customers from transferring. The infrastructure is also significantly more affordable.

The Eastern Corridor Study, like other rapid transit infrastructure in Winnipeg, will include design considerations to allow for transition from BRT to LRT in the long-term.

How can I stay informed about the study?

Please subscribe for project updates in the top right corner of this webpage.